This morning I gave a presentation on Video Games and Learning. I’ve wanted to have this discussion since I started as technology coordinator and since beginning the SimCity project. The focus of the presentation was on the opportunities presented by video games and the skills learned, hopefully providing an entry into why kids (and lots of adults!) play the games they do and why they enjoy them so much.

I tried to walk the line between research and practicality and tried to frame how we think and talk about video games rather than giving my opinions, though my positive bias is clear. I wish I could have had more time to devote to the current research on the transfer of skills from video games to other arenas and the effect of play violence in teenagers. But that is what graduate school is for!

The best part was my somewhat last minute decision to play MMTW, Massively Multiplayer Thumb War, as inspired by Jane McGonigal from ISTE last year. I felt like I couldn’t talk about games without playing one!

Overall, I hope that people come away holding worries at bay and looking with their kids towards the opportunities. Technology is neither good nor bad, though it does change what life affords and affects us as individuals and as communities. When I look at the world, I am fundamentally hopeful about what the future will be, and maybe growing up around the Scrabble board helped shape me that way. 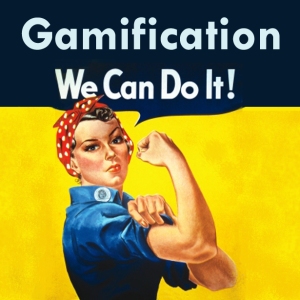 I’ve got a couple ideas for a new approach to my 6th grade class, and I’m pretty much just going to list all the things I’m thinking about. It’s a little jumbled stream-of-consciousness right now, but hopefully writing it all down will help.

I teach 6th grade technology. In the current schedule, I see a group of 18 students one week on Tuesday and Wednesday for an hour each day, and then not again for another month. The librarian also teaches in this rotation, so for next year we are thinking of team teaching the group of 36 students in order to see the kids for more time and have more continuity. In this set up, we would do two-week long projects.

But what kind of project is engaging to 6th graders in an hour-long class right before lunch? Honestly the best class I can remember was teaching them how to use Scratch. Actually, I wasn’t so much teaching as just allowing them the time to play it.

So I have two ideas:

1. Gamify the class using 3DGameLab and turn it into a series of quests. We could find quests that involved using library and tech skills so that they were learning the skills from both classes. Some of the early quests would be fast, like taking a screenshot of their calendar to show they had properly subscribed to all their teachers’ calendars, and some of the later ones could be longer, like designing their own avatar. I’m daunted by the amount of work that would be needed to build this all, but maybe it would be worth it both for the better structure to the class and to test out what that looks like. Hmmm.

2. A project that I have always wanted to do with students is to have them design their own avatar or logo. They would first build it as a profile image that they could use for their google apps account. We could talk about image resolution and thumbnails if they were to try and print it the size of a page. It should be an image that looks good large and small. The FINAL step would be for them to print it from the 3D printer as a stamp, so they could stamp their logo.

At first I was thinking I would have to choose one or the other, but after writing this out, maybe we could do BOTH! I am hesitant to try a new format with a new project, but it seems like a huge opportunity.

Also, my class is a rotation class that meets twice/week and repeats. It wouldn’t be that much prep. And how can I expect other teachers to try it if I don’t? Besides, our head of school asked us to change one thing this coming year. Reimaging my class in both content and form sounds like a good place to start!